Discs of TRON Get Real

Boy, the TRON: Legacy merchandising team has kicked into full force. Whether you’re looking for some trashy high-heels, a lightcycle USB drive or some Daft Punk headphones, they’ve got something for you. Here’s another fun TRON gizmo – it’s a little toy that lets you play with the movie’s famous discs. 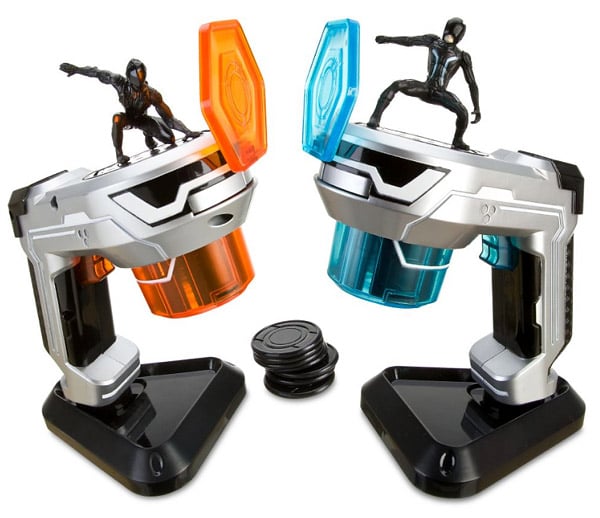 With such a high-falootin’ product name as the TRON Legacy: Coliseum Disc Battle Play Set, you’d think this thing would actually feature glowing discs that could derezz (or is it derez) your friends in a second. Instead, you get a set of toys that remind me of those cheezy Star Trek phaser toys from my childhood. You know, the type that fired those little plastic discs, and scratched the occasional cornea?

Disney’s updated version definitely echoes the style of the TRON franchise, with a tiny Sam Flynn atop one of the handheld disc launchers, and a miniature Rinzler on the other. Having not seen the new movie yet, I’m not sure if Rinzler is a big deal, but I’m guessing he is, or else they wouldn’t stick him on top of this thing, right?

If you’re ready to shoot your eye out, you can grab the Disc Battle Play Set over at the Disney Store now for $22.50 (USD).