Japanese Dudes Invent Skydiving for Those Afraid of Heights

I always thought that skydiving would be cool, then I remember that being on the roof of the house is about as high off the ground as I care to go without actually piloting the aircraft myself. I think these guys from Japan have come up with a solution for people who want to skydive, but are afraid of heights using a projector and Google Maps. 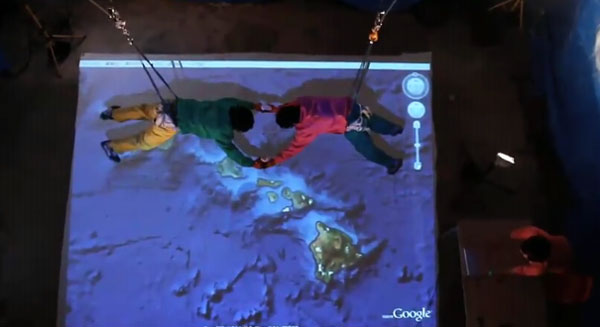 The guys mounted a projector vertically so it shined on the floor. They put blue plastic on the floor and walls and painted clouds on the walls for effect. The two skydivers were then harnessed up and hung from the ceiling as if they were diving.

The projector output a Google Map image of an island on the floor and as the map was zoomed, it looked like the duo was actually coming closer to the ground. To make things more realistic they used a fan to flap the hair and clothing around and hosed them with a fire extinguisher to make it seem like they were going through clouds.