There are already remote-controlled robots out there that allow an operator to control robotic arms using their own hands. Doctors are even using such technologies to perform remote surgery. But this is the first time I’ve seen a robotic arm that can be controlled simply through gestures. 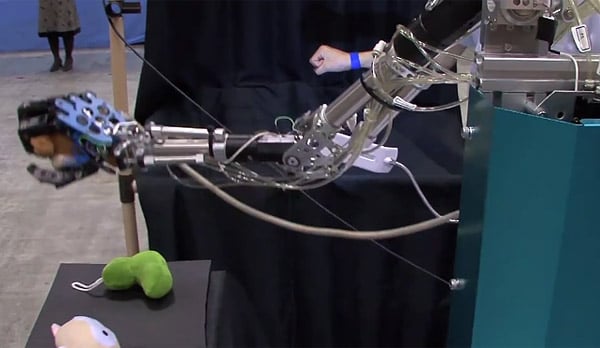 Developed at the University of Tsukuba, this robot arm is connected to a computer with a pair of video cameras which can detect the hand, arm and finger movements of its master. Whatever he does, the robot follows. As you can see from the video below, it’s actually quite impressive how well it mimics the individual finger movements and grip of its operator.

It’s even been tied to a database that’s capable of adapting itself to numerous different hands. At this point, the robot arm system still has a tiny bit of lag, and isn’t precise enough to perform medical procedures. Still, it’s a very promising step in the development of remotely controlled robot avatars – and that’s something we all want, right?