I’ve been an iPhone user for a couple of years now, but it’s always nice to get the chance to spend some time with the other smartphone platforms out there. Recently I’ve gotten to play with my first Windows Phone 7 phone, the HTC HD7 (T-Mobile). It is among the first of the WP7 phones on the market, with a giant screen and plenty of features. 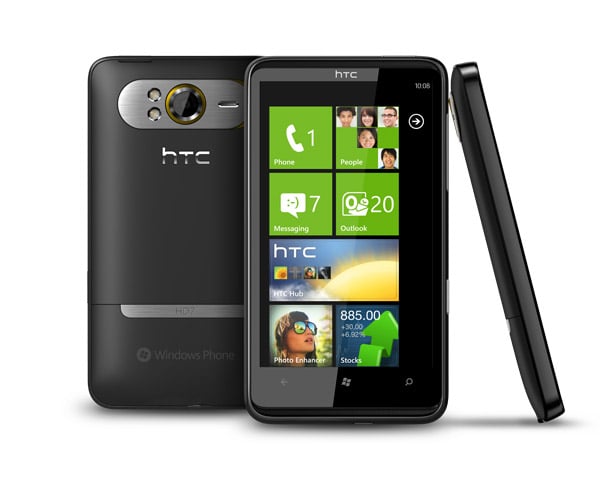 I’m going to do my best to break this review down into two main sections. First, I’m going to concentrate on the hardware of the HD7. Then I’ll have a go at the Windows Phone 7 operating system.

The first thing anyone notices about this phone is the large screen. The screen measures 4.3” which seems gigantic when compared to say, the iPhone 4’s which is only 3.5”. This makes things like playing games and watching videos rather nice. The downside is that the phone itself has to be larger to accommodate such a screen. It takes some time to get used to carrying around a phone this large. Thankfully it is nice and slim, so slipping it into a pocket isn’t any trouble.

They say that size isn’t everything, and that is true of screens. While the HD7’s is large and bright, I was  disappointed by the image quality on the 800×480 display. When you turn the phone away, the colors begin to wash out a bit too quickly for my tastes. Don’t get me wrong, the screen still looks good, just not the best I’ve seen around. If you’re wanting to use the phone for viewing long videos, you’ll be pleased to find a kickstand on the back, which allows you to prop your phone on a table or desk.

As for the touchscreen capabilities, I’m plenty pleased. I had no problems navigating around the various menus, or when typing using the on-screen keyboard. Typing is one of those areas that no doubt benefits from having the larger screen real estate, as the letters aren’t crammed together so much.

While you’re relying on the screen to show you video, you’re obviously going to need some audio to compliment it. This is handled by front-facing stereo speakers. I like this idea, as the phone is generally facing you when you’re listening to audio through the speakers. I wasn’t terribly impressed by the quality here. When watching videos or listening to music, I found the sound to be muddy and lacking in clarity. It wasn’t bad enough that I couldn’t tell what I was listening to, but it wasn’t pleasing to hear. 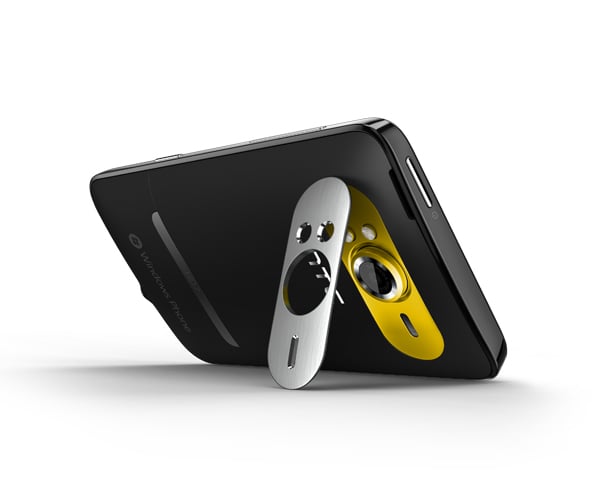 Camera performance is about average. It can take some good shots, but it seems to have some trouble auto-focusing from time to time, which can be an annoyance. I will say that I like having the ability to activate the camera simply by holding down the dedicated shutter button. You don’t even have to unlock the phone to do this. Sometimes those few extra seconds can make the difference between snapping that perfect shot, and missing it.

Overall, the HTC HD7 is an average phone, when judged solely on its hardware. It’s really not one of the most solid phones out there, or even the best HTC phone that I’ve used. But if you’re looking for something with a nice, big screen that runs Windows Phone 7, then it might not be a bad choice. But that depends on what you think of Windows Phone 7, doesn’t it? That brings us to the next part of the review.

The mobile phone industry has really had some major leaps in the last few years. First Apple came along with their iPhone, which revolutionized the smartphone market. Then Google brought us the Android platform, which gave us a much more open solution to the mobile phone. In that time Microsoft’s mobile platform was left in the dust. Compared to the other offerings, it just felt clunky and outdated. Thankfully the Windows Phone 7 platform gave new life to the company’s mobile offerings.

When you fire up a phone running the new OS, you’re greeted with a nice lock screen, which gives you basic information such as date, time, battery life, signal strength and messaging/call alerts. A quick swipe of your finger brings you to your phone’s main screen.

I love the look of the main screen, because it’s so simplistic. You’ll see the time, signal strength and eight tiles. These tiles are your way of accessing the most important applications on your phone. Of course this sleek look is also one of the things that I dislike about the phone’s appearance.

While it is nice to have my most-used apps at my fingertips, only allowing for eight of them to be seen is an annoyance. I’m someone who likes to use their phone to do as many tasks as possible. This means I have to pile up large blocky icons on the Start page to flick through, or go hunting through lists to find the software I need. There are no folders in which to store similar applications, or even different email inboxes. That’s right, if you have more than one mail account, you’re going to need a separate icon for each. There isn’t even a search bar that you can use to quickly find an application.

The UI itself does have some nice, subtle touches that I enjoy. These are mostly in the way of small animations when launching an app, or moving around within one. It is a nice contrast to the very two-dimensional look that the UI generally gives. One second you’re staring at a boring, organized list, only to have the tiles fly away as you launch whatever application you’ve selected. 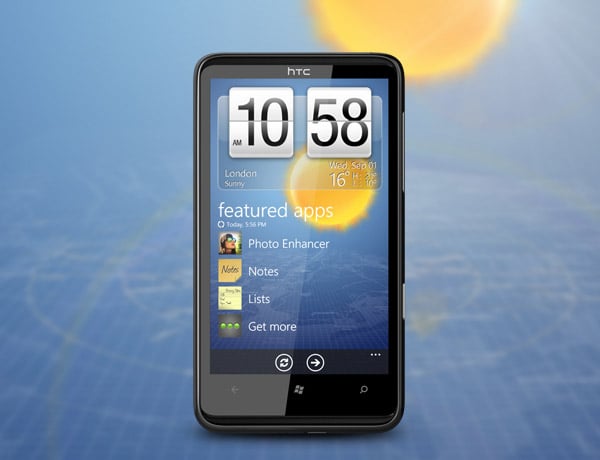 When you look at the basic functions, Windows Phone 7 does them well. Tapping on the phone icon brings up your call history, and gives you icons for your voicemail, dialer and contact list. While in a call you have nice big buttons for speaker, mute, hold and add call. If you want to bring up the number pad again, you’ll need to tap a smaller button to bring it up.

Messaging is very simplistic, which seems to be a theme here. Conversations are broken up into contacts, which are listed by the date/time of the most recent message in each. Once in a conversation, each message is listed in its own chat bubble, much as you would expect.

One very basic function that you will not find on this device is copy & paste. This is appalling. You would think with the amount of flak Apple caught for it on the iPhone, Microsoft would have this feature in from the start. It’s supposed to be coming in an update which looks to be hitting next month sometime, but that still doesn’t get rid of the bad taste its current absence leaves in my mouth.

Something else simple that is nowhere to be found is the ability to take screenshots. This feature would come in handy in a variety of situations, especially when trying to do a phone review. After much research, there is currently no way whatsoever to take a screenshot unless you are running the phone’s software on an emulator on your computer.

This is where you’re going to go to add new content to your phone. The Marketplace is broken up into four main sections. First is the HTC Apps (obviously not found on non-HTC phones), apps, games and music. These are further broken down into categories, including featured, free, and new content.

One of my biggest complaints here is the layout. When you first enter the apps section, you’re once again greeted with lists. These lists are written in a thin, white font. That’s perfectly fine if you’ve got a solid black background. But instead they’ve plastered a collage of pictures behind it, making this boring list much harder to read. Once you do select one of the categories from the list, you’re taken to another section, which thankfully has that boring black background that makes everything readable again.

Navigating through the Marketplace is simple enough for the most part, though one does get tired of scrolling through endless lists after a while (something you’ll find in every aspect of the OS). Downloading and installing apps is a painless process. Though I will say that after you’ve installed an extra 20 or 30 things, things start to get harder to find in the phone’s app list. (which means more scrolling). 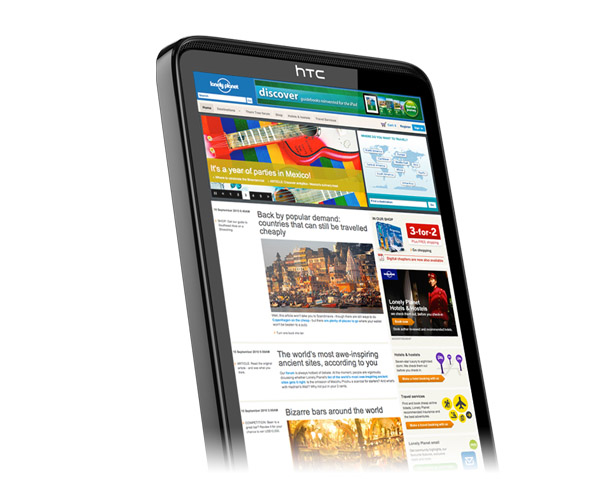 As a gamer, I’ve been disheartened to see a lack of official connectivity between Xbox Live and mobile phones. Sure, there are apps available on the iPhone, but nothing straight from Microsoft. Thankfully this is something that they did decide to integrate into Windows Phone 7.

Surprisingly the Xbox Live feature has pretty much everything I’d have wanted in such an app. Your avatar loads up, along with your Gamerscore. You’re able to check achievements, see which friends are online and check/send messages. You can even customize your avatar right from the application.

There is also a separate section for Xbox Live games on your phone. Not every game available on Windows Phone 7 is available here. These are specially-branded Xbox Live games, some of which are also Xbox Live Arcade games. They all seem to be of a higher quality, and all feature demos, so you know what you’re paying for.

As you can no doubt imagine, the heart of Windows Phone 7’s multimedia functionality is the Zune software. If you’ve ever owned a Zune, then you’ll feel right at home with video and music playback. You’ll use the desktop software to assemble and arrange your media, and sync it up with your phone. MP3, AAC, WMA, MPEG and H.264 are all supported.

Zune Pass is also available on the phone, which allows you to stream unlimited music to your phone, for a monthly cost. I’m not sold on the service, as I’d much rather own my music, rather than rent it. Besides, with services like Pandora offering up streaming for free, I have a hard time justifying a Zune Pass.

I could probably go on for days about each and every feature of the phone and its software. However, the bottom line is that Microsoft has delivered a solid mobile phone platform. It’s not without its shortcomings, but with the exception of copy & paste (which should be getting fixed in an update) none are dealbreakers for me.

So is it better than iOS/Android/etc? I would say that it is a strong enough platform that it can easily compete with anything else on the market. As for better or worse, I’d say that comes down to preference. Each has their own strengths and weakness, and it’s going to come down to a matter of preference for the user. What I can say is that the mobile phone market just got a lot more interesting.