SawStop Does Its Best to Not Cut Your Finger Off

If you’ve ever used a table saw, you’ve probably had the horrific image of your fingers going flying off if you slip. 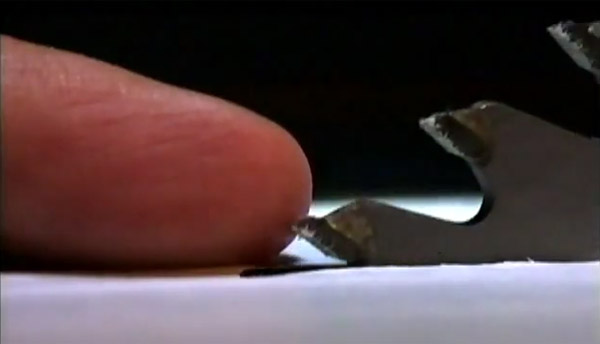 The incredible SawStop system uses capacitive sensors to detect when you accidentally touch the deadly spinning blade with your flesh. The SawStop can detect skin within 5 milliseconds, and as soon as it senses flesh, an aluminum brake springs into action, stopping the blade and forcing the blade beneath the top of table. Power is instantly shut off at the same time. Your finger might get a little nick, but the injury potential is greatly limited by the system.

The technology manages to stop a saw that’s spinning at 5,000 RPM dead in its tracks. If you don’t believe it, check out this video of Steve Gass, SawStop’s creator, who’s so confident in his invention that he sticks his own finger right into the path of a spinning saw blade.

Sure, the mechanism pretty much destroys the saw blade and the mechanism in the fraction of a second that it takes to stop the blade on a dime, but I’d rather destroy $69 blade cartridge than lose my digits. And if you don’t believe it, check out these images of actual customer’s fingers which have been spared by SawStop technology.

Plus, as we learned from the video, it will also prevent hot dogs from being mangled – in case you frequently drop those into the buzz saw.