iPhone 4 Cake Actually had iPhone 4 Inside

We like our geeky cakes around here and the gang at Gizmodo has some pics of a birthday cake that a geek was served that looked just like an iPhone 4. The birthday boy was Carlos, and the cake looked yummy enough on its own. 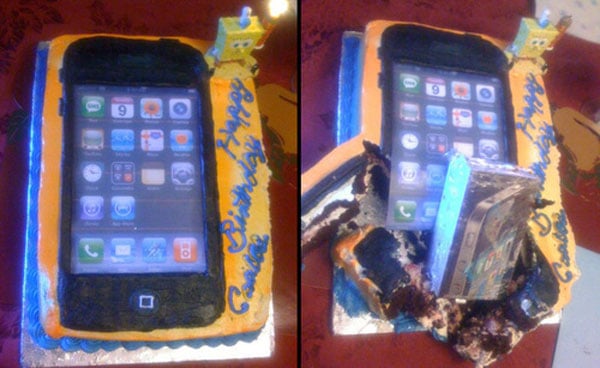 When Carlos when to cut the cake he got another surprise, a real iPhone 4 to match his yummy cake was inside. It’s a good thing Carlos isn’t the sort of guy that stabs a cake first and then cuts. It would suck to stab your new iPhone 4 accidentally.

Obviously the cake can’t be baked with an iPhone inside it all boxed up. The image of the iPhone screen on top of the cake looks like one of those edible photos. I bet the cake was hollowed out where the iPhone needed to sit and then the image was put over the top of the phone to hide it. However it was done, this is one cool cake.