If I had a Quadrocopter remote-controlled flying aircraft floating around my place, I’m not sure this is the first thing I’d do with it. But it is the holidays, and I guess the joyful Christmas spirit is strong with the guys who programmed their Quadrocopter to play a little festive holiday tune. 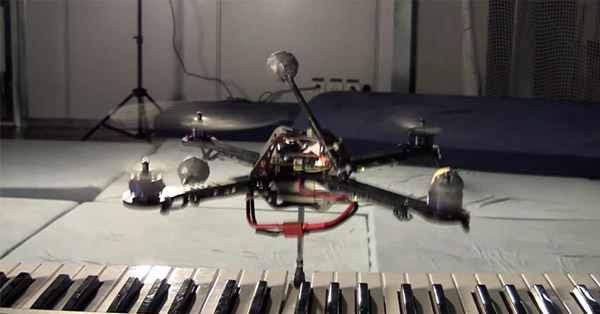 The researchers at the Swiss Federal Institute of Technology took a break from sipping their Swiss Miss hot cocoa (with mini marshmallows) to teach Echo, their flying Quadrocopter drone to play a little Jingle Bells:

Whenever I hear that little ditty, all I think of is “Batman smells, Robin laid an egg…”

Sure, it’s not as impressive as some of the other robotic musicians I’ve featured before, but then again, none of them were trying to hover in mid-air while playing, either.