We have had PS3 hacks around for a long time, but typically, they are plugged with new firmware just about as fast as they are published. Sony doesn’t like hacks for its console and likes us to think that any hack is just a way to pirate video games, not to use the console for other purposes. 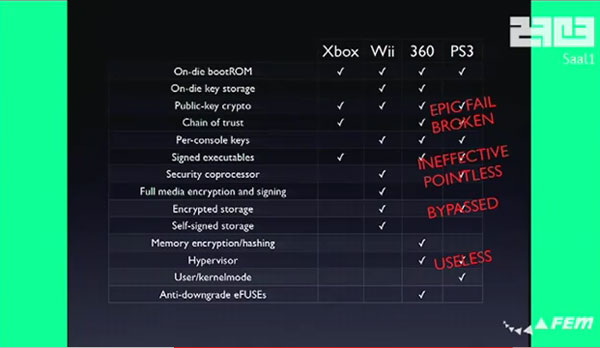 A hacker clan called fail0verflow has announced the most epic PS3 hack ever. The group has announced that they have determined how to calculate the numerical keys needed to sign software so any custom software can be loaded on the PS3.

The hack will apparently allow any software to be run on the PS3 just as it was approved by Sony to do so. That would mean that PS3 games duped and burned to Blu-ray would work as well as legit home brew software, or more importantly, homebrew apps can run. Fail0verload claims that the intention of this was to allow Linux to be installed on the PS3, not to allow pirated games to be played.