addOn: OnStar Coming to Every Vehicle

Think back a number of years ago when OnStar first launched. The ability to talk on your cell phone without actually having to hold a cell phone was really novel. Of course, this was back in the days before Bluetooth was as common as it is in cars today. OnStar was one of the first systems that offered this hands-free use and it will do a lot more too. 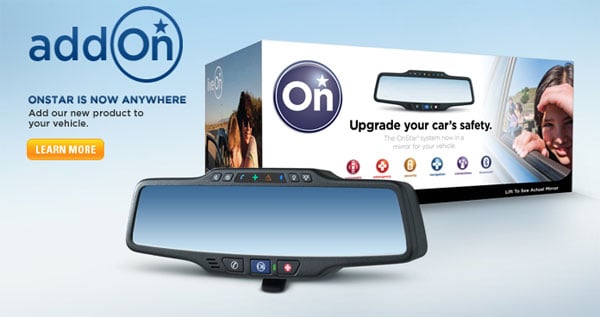 OnStar can track your car if it gets stolen, unlock the doors, call 911 if you crash, and tell you how to get somewhere with navigation capability. The catch for most drivers was that OnStar was only offered on GM vehicles until now. OnStar has announced at CES today that it has a new add-on mirror (called addOn). The rearview mirror replaces the normal one in your vehicle and adds in those cool OnStar features like automatic 911, navigation, Bluetooth hands-free calling and others.

The mirror will set you back about $300 (USD). I would assume that the addOn system can’t do things like unlock your doors since it isn’t integrated with all the electronics in the car. OnStar addOn will be coming to Best Buy this spring and to other retailers later this year.