The tablet wars continue at CES this week, with more and more competitors entering the fray. Motorola is one of the companies who recently announced entry into the market, with the XOOM Tablet (I wonder what the first XOOM thinks about having a namesake). In a market that’s quickly being saturated, the XOOM has a handful of features that Motorola hopes will make it stand out and be noticed. First of these is its operating system, Android 3.0 Honeycomb. 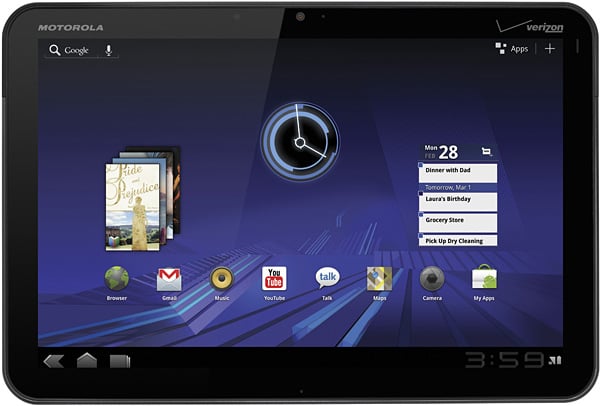 The XOOM is the first to use Google’s tablet-optimized Android, which should bring “widgets, multi-tasking, browsing, notifications and customization and features the latest Google Mobile innovations” to tablet devices. A couple of the Google apps that will be on the tablet are Google Maps 5.0 and Google eBooks.

As the video above mentions, hardware-wise the XOOM is a powerhouse – 1GHZ dual core CPU, 10.1″ HD 1280 x 800 screen, a 5mp rear-facing camera that can capture 720p video, and a 2mp front-facing camera that can be used for video conferencing. The Xoom also has lots of sensors, such as “built-in gyroscope, barometer, e-compass, accelerometer and adaptive lighting”. The XOOM also supports Flash 10.1, so watching videos online should be no problem for the tablet. Below is a video shot by CNET at CES 2011, featuring a Motorola rep cautiously showing off the XOOM.

The final ace up the XOOM’s proverbial sleeve is the promise of LTE. The device will be under Verizon’s 3G network when it comes out on the first quarter of this year, but the telecom company promises that XOOM will be able to upgrade to a faster LTE network in the second quarter.

What do you guys think? As someone who has yet to purchase a tablet device I’m actually very interested with the XOOM, but I think I’ll wait for the Notion Ink ADAM to come out, and of course the iPad 2 before I make my decision.