If you are the early adopter sort, you know being the first to get your hands on a gadget that is the world’s first this-or-that is never cheap, and often that stuff you pay out the nose for just doesn’t work like you expect. JVC has announced a new and very expensive camcorder that is the first consumer camcorder in the world to offer 1920×1080 (1080i) 3D recording. 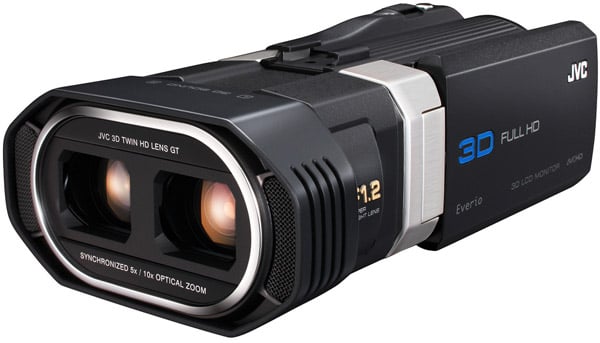 The camera is called the JVC Hellaspensive (ok, it’s really called the GS-TD1) and it will land in March for $1999.95 (USD). For that much scratch you get a camcorder with dual 3.32MP image sensors and lenses for recording 3D in full HD. Those fancy lenses get 5x optical zoom and the 3.5-inch touchscreen pops out of the side for watching your 3D content.

The screen doesn’t need glasses either so you won’t look like a tool at your kids soccer game watching your playback. The camera supports 3D time-lapse recording and stores video to 64GB of internal memory. That storage can be expanded with SD cards as well. It can also capture “3D Sound”, whatever that is.