GM EN-V Goes for a Spin at CES

I’m not quite sure how I missed this thing at CES. It must have been shown behind closed doors, or maybe some doors I just didn’t bother to peek through. At least the guys at Mashable shot some footage of this goofy looking two-seater, the GM EN-V. They titled the clip “eggcar” though, and I like that better, so that’s what I’m going with. 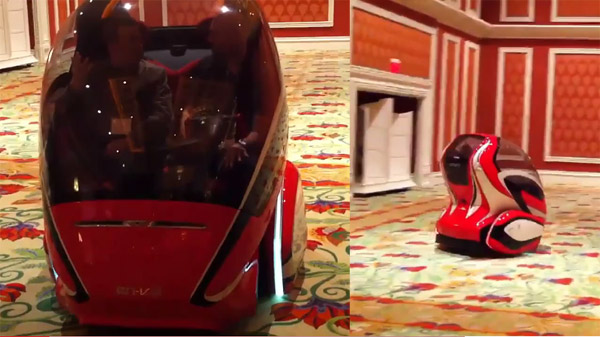 The guys in the video describe the two-wheeled concept car as both “an enclosed Segway” and “the coolest vacuum cleaner I’ve ever seen.” I’d have to say both are completely accurate characterizations. Here’s the zero-emission eggcar in all it’s glory…

I honestly can’t believe they can fit two occupants inside this tiny little thing. Still, you’ve got to hand it to them for the unique touchscreen steering wheel. I thought that was pretty cool. For some reason, I doubt the EggCar will ever be street-legal in the States, but you never know. After all, they let the Renault Le Car and the Yugo out on the roads.