My favorite thing to do at CES is dig around the smaller booths for the more unusual gadgets out there. With thousands of booths, it takes some serious legwork, but occasionally I find something worthy of a mention. Here’s one of those things. It’s a flashlight that can actually record video. 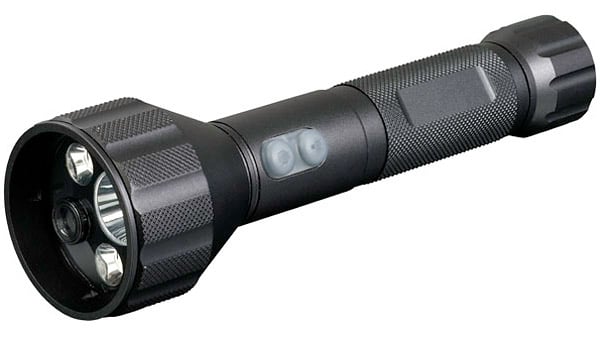 Built into Goscam’s GD2716 Light Force flashlight is a video camera and DVR. The flashlight features multiple extra-bright 1-watt LEDs, and the camera can capture VGA (640×480) video onto the flashlight’s internal memory. Up to 32GB storage is available, and the whole thing runs on a built-in rechargeable battery that’ll give you 3.5 hours of run time on a 4 hour charge. Once you’ve shot your video, you can download the captured AVI files to your computer via a USB 2.0 connection.

While I’m sure this is really designed for use by law enforcement so they can record video of suspects at the end of the flashlight, it can also be used for building inspectors and construction workers, and anyone else who needs to capture video in the dark. Sure, you can’t go unnoticed like you could with a nightvision camera, but this will probably capture much better video. Of course, you could always just strap one of those GoPro cameras to a flashlight with some duct tape and achieve a similar result.