This unusual gadget connects to your computer, and can be programmed to emit a variety aromas on digital cue. 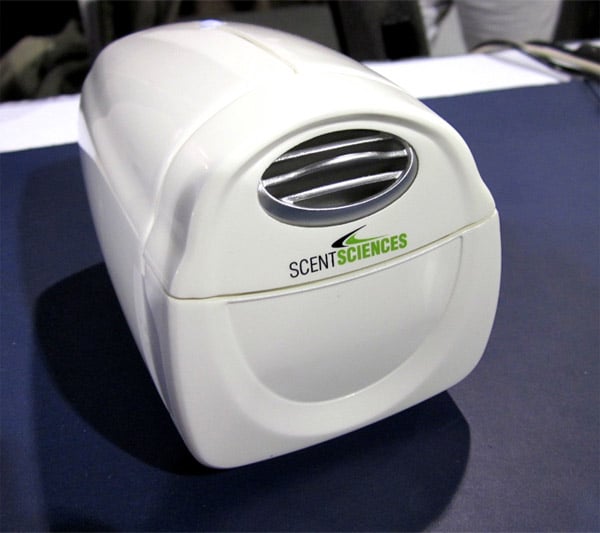 With an expected retail price of $69.99 (USD), ScentSciences‘ ScentScape device is a compact plug-and-play USB device which can be synchronized with your content, outputting scents along the way. The compact gadget can be loaded up with a cartridge containing 20 scents like forest, ocean, flowers, a Christmas tree, or even chocolate. Using their ScentEditor software ($19.99) you can load in a video clip, and then attach scents to cue points in the video.

ScentSciences was showing off a demo unit at CES this past week, and was they played a video, a cinnamon roll came on screen, and seconds later, the booth filled with the aroma of freshly baked cinnamon. I recorded a brief video clip, and then realized that it doesn’t really work without the smells. So before you hit the play button, grab a jar of cinnamon from your pantry and wave it under your nose about 15 seconds in.

Makes perfect sense scents, right? In addition to a stock set of 20 scents, they plan on producing custom scent cartridges for specific purposes, like if a game developer or movie studio wanted to enhance a specific movie. All I can think of is a Blu-ray edition of Polyester, in digital Odorama instead of using scratch-and-sniff cards. Delightful.

ScentScape envisions using the system to enhance games, movies, and personal content to leverage yet one more sense in addition to sight and sound. ScentScape is currently offering a software development kit (SDK), including a ScentScape player unit, a scent cartridge good for approximately 200 hours of use, demo software, and drivers for you to create your own artificially-scented applications. The SDK sells for $495 (USD), and individual consumer units will sell for around $70.

The whole concept is definitely odd, but I have hand it to the ScentSciences guys for having something that stood out from all the Android tablets, 3D TVs, and junk from China littering the aisles at CES – even if it does smell a little bit.