For those of you not familiar with One Piece, its a Japanese manga series that’s been around since way back in 1997. It follows the exploits of a boy named Monkey D. Luffy, who gains elastic powers after chowing down on some mystical fruit. Yeah, weird, I know. It gets better. In the One Piece universe, they use something called Den Den Mushi or “transponder snails” as their electronic gadgets. Yep, these gastropods (wow, we got to use the word “gastropod” word twice today) act as everything from telephones to cameras and fax machines in the world of One Piece. So I found it amusing when I came across this bizarre little gadget, a pocket sized voice recorder designed to look like a transponder snail. 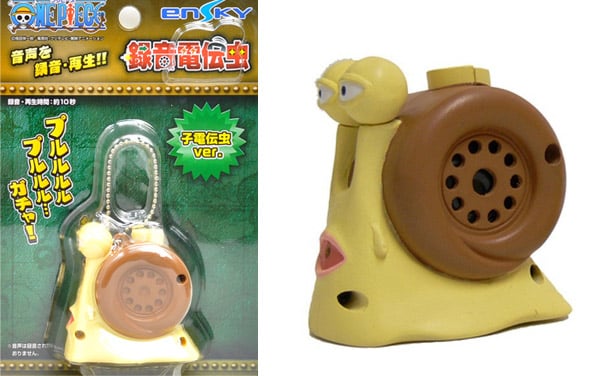 Yeah, the idea of using a snail to record personal memos is weird to me too. But maybe if you’re a fan of One Piece, it’ll make all kinds of sense to you. Of course, at an imported price of $37.80 (USD) for this thing, you’ll have to be a really, really big fan to bother throwing your hard-earned money at such a ridiculous thing.