There are tons of rumors floating around about the iPhone 5 and iPad 2, but not much about the next-generation iPod Touch. Here’s one of the more outlandish rumors I’ve come across. 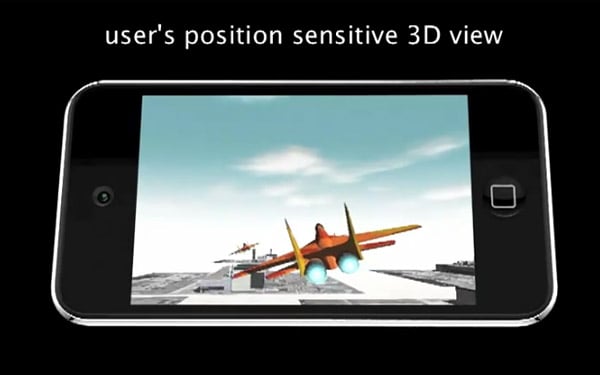 The guys over at Japanese blog Macotakara (translated from Japanese) have theorized that an upcoming iPod Touch will get the same sort of 3D display found in the Nintendo 3DS. According to the site, Apple has filed several patents for 3D related technologies since 2006 (but I can’t find any of them directly mention portable devices.) In addition an unnamed source at an LCD panel manufacturer who provides displays for Apple claims they are preparing for production of a small glasses-free 3D LCD panel for use in the next iPod Touch.

As a result of one particular patent, titled “SYSTEMS AND METHODS FOR ADJUSTING A DISPLAY BASED ON THE USER’S POSITION,” Macotakara suggests that the gadget would support 3-dimensional head-tracking interactions that take advantage of the motion sensors and gyroscope in the gadget, and have even go so far as to put together a video showing off how they think the 3D iPod Touch might work:

Frankly, I’m suspicious of this particular rumor, as I think if Apple were to jump on the portable 3D bandwagon, they’d wait until the Nintendo 3DS comes out and they see how it fares. With 3D being such a gimmick up until now, I doubt that Apple would  jump at such a feature without more evidence that the market really wants it. That said, if they did do it, it would strike another blow against Nintendo, as Apple’s dominance in the handheld gaming market continues to grow.

Just think how less than 3 years ago, Apple hadn’t even opened the App Store yet, and had never sold a handheld game. Now there are hundreds of millions of  game downloads each year. I certainly play my Nintendo DS way less since the iPhone and iPad came out, so I wouldn’t put it past Apple to take another shot at Nintendo if the 3DS is successful.