Carbon Nanotubes Makes Aerogel Even Lighter Than it Already Was

Aerogel is a man-made material that was invented a while back. It’s one of those products that is really cool, but hasn’t made its way into anything too interesting that I have seen yet. Aerogel is the world’s lightest solid though, and scientists have used our friends the carbon nanotube to make this stuff even lighter. 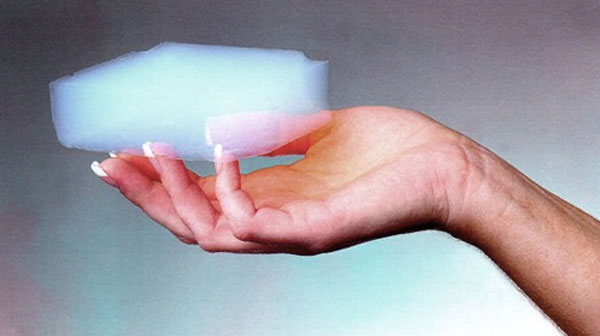 The new aerogel is dubbed “frozen smoke” thanks to its opaque appearance. The technical name is “multiwalled carbon nanotube aerogel” and the developers think that the stuff could be used in future sensors, electronics, and chemical reactors. The stuff weighs has a density of 4 mg/cm^3, which means it’s really light.

The coolest part for me isn’t that the stuff is so lightweight though, it’s the surface area. The scientists behind the new aerogel say that if you took the carbon nanotubes coiled inside a once ounce cube of the gel and uncoiled them and placed them end to end and side to side, they would cover three football fields. That is some serious surface area.