Dominoes are gaming pieces, but we all know it’s a lot more fun making them fall than actually using them for their intended purpose. We usually make long lines or intricate shapes using the pieces before making them fall one after the other, but this is the 21st century! Screw Physics! Who says a domino has to fall on another domino to make the latter fall? 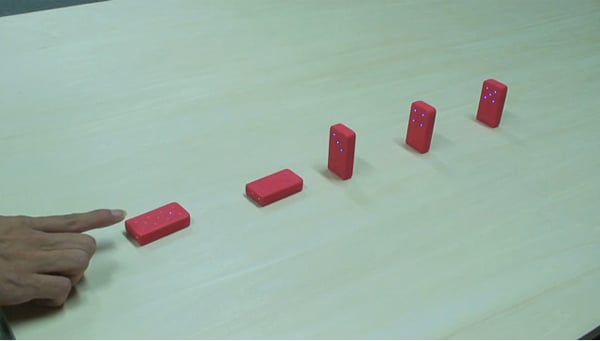 The Esper Domino set was made by Jarashi Suki and the IAMAS Ubiqutous Interaction Research Group. It really is a piece of magic. Each piece can interact with other pieces wirelessly, so when one piece falls, another piece can follow even if the two are not next to each other. You can even queue other pieces to fall based on their number, e.g. make all number 5 pieces fall at once. You can even change the number of dots on each piece! Dayum!

The iPad was revolutionary? The iPhone 4 changed things all over again? We’ve limited ourselves verbally, and now we have no words for this…this…we have no words. I hope the folks behind the Esper Domino turn this into a real toy, because it’s going to be a hit for sure. And while they’re at it, maybe add the ability to make a domino piece stand itself back up. Wouldn’t that be something else.