ToDoGenius iOS App: Like a Tiny Secretary in Your Pocket

To-do applications are a dime a dozen. Some of them simply involve taking notes, most of them integrate with calendar software, and some are general purpose apps – if all you want is to keep a list, any text editor will do.  But Ipanamea’s app ToDoGenius has a couple of innovations going for it that separates itself from other organizing software. They’ve made it so you can add a task without entering any text at all; instead you select from one of 20 icons that represent the task. The other thing that makes ToDoGenius unique is its AI, which can recommend a task for you to accomplish based on a variety of criteria. 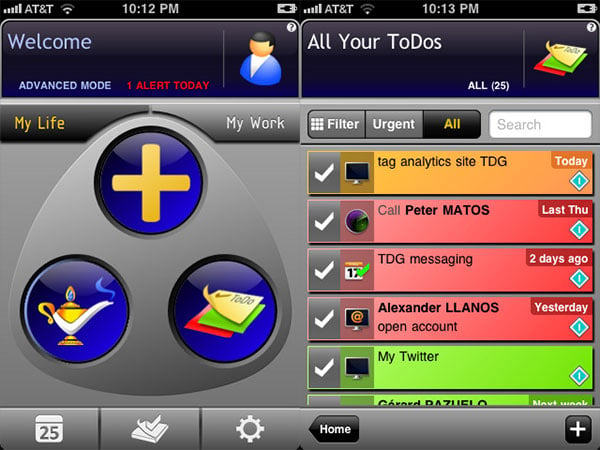 Tapping the genie icon on the app’s home screen calls the AI, which is basically a smart filter. The app will ask you the main type of task you want to accomplish – personal or work – as well as other things – such as how much time you can spare at the moment – and take into account other aspects of your pending tasks – date, location, urgency – and then it will pick at most three tasks that you can do. If you don’t want to do any of the tasks it picks, you can skip all three suggestions and it’ll cough up something else. Here’s an overview of ToDoGenius:

As with all organizing apps, ToDoGenius is perfect for people who really have packed schedules and are likely to forget some of their appointments. Otherwise if you have a relatively simple schedule don’t bother with this app, it’s too complicated and unnecessary. I think the best thing about this app isn’t really the genie, but the fact that you can add a task without entering any text. As you saw in the video it’s a quick way of adding even multiple tasks, especially on a device with a small screen and no real keyboard such as the iPod Touch or iPhone.

You can get ToDoGenius at the App Store for $4 (USD). There’s also a free version available, but it only lets you save 5 tasks at a time. I’m sticking with iCal and Notes on my iPhone for now. In fact I can recite my schedule from memory: wake up, eat, sleep, wake up, work, Mass Effect 2, oh crap it’s already 2 am, keep playing Mass Effect 2…

[via Gizmos For Geeks]