I get the fact that some people need telepresence, but ultimately even the cheapest options can cost you thousands. That’s why I really like this telepresence robot hack from Johnny Chung Lee. The best news is that it only costs $500. 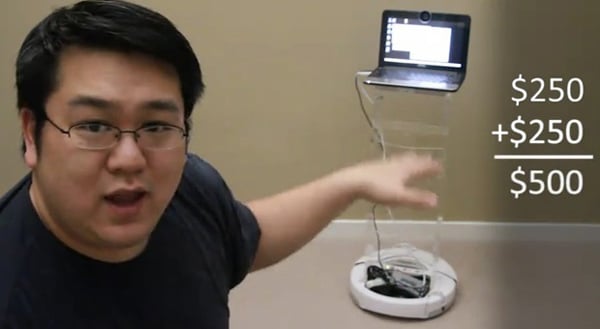 Wiimote hacker Johnny has built this inexpensive telepresence bot using an iRobot Create, a cheap netbook, and a bit of laser-cut acrylic. The whole thing runs on custom software which let’s Johnny remotely steer the robot and see where he’s going as his face appears on the remote netbook screen. He even hacked the iRobot’s charging station so the ‘bot can recharge itself without human intervention.

This is definitely a cool option for people who absolutely need to be somewhere they currently aren’t. Read more about Johnny’s telepresence ‘bot over at Procrastineering, where you can grab the software for yourself if you want to try to make your own.

[via FastCompany via Make:]