I’m sure there are ready-to-use replicas of Batman’s Shakespeare bust (the one with the hidden switch) that you can buy somewhere – in fact we featured one a few years ago. But if you’ve got the skills and the tools, you can try making your own by following the guide made by The New Hobbyist. Not only will you save money, but you’ll be able to use any bust or statue that you’d like; for example The New Hobbyist used a bust of Beethoven. 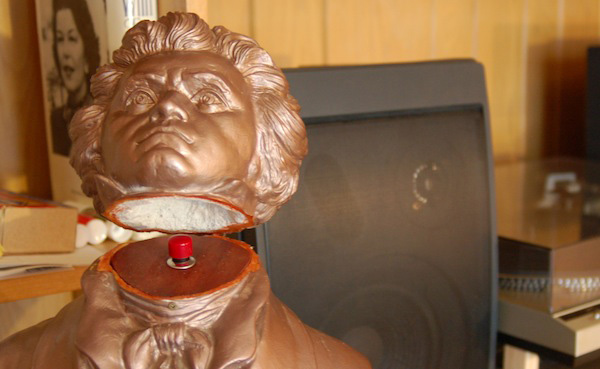 Aside from the bust, the other crucial part to this project is the remote control light switch – The New Hobbyist got his from Lightobject. He removed the guts of the remote and soldered the red push button onto the PCB. Then he decapitated the bust, carved out a space for the light switch on the neck are and then installed his custom switch. Here’s the final product:

One advantage of the remote control light switch that The New Hobbyist used is that it can toggle multiple lights simultaneously. Obviously I just gave you an oversimplified explanation of the steps involved, so you better go to The New Hobbyist’s website for the whole guide. If I had the skills I’d probably make one that triggers a sound file of a loud explosion, and scare the crap out of anyone who dares to touch my bust.