Pionen Data Center: Where Bond Villains Would Store Their Data

If I were an evil genius, this is totally where I would store my plans for world domination. When James Bond came by to foil my plans I could say cool things like “No Mr. Bond, I expect you to collate data.” If the room this data center is in looks like a cave, there is a good reason for that. It is an underground cave. 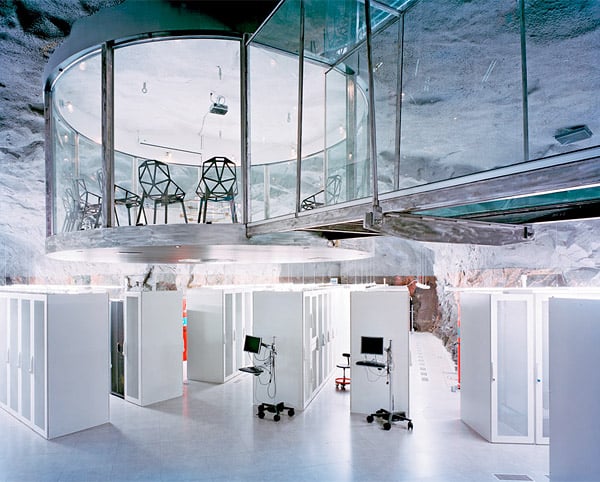 The Pionen Data Center in Stockholm, Sweden is a former military bunker and nuclear shelter site that is under the streets of Stockholm. The data center can theoretically survive a nuclear strike and has 24-hour video surveillance. The door to the room is armored and 2-feet thick.

The coolest feature is the custom-made catwalk and round glass conference room that hangs from the ceiling. The ISP that runs the data center is called Bahnhof and the glass, frames, and walkway were custom cut to fit the uneven rock texture of the ceiling. The data center has a pair of V12 diesel engines from submarines to act as backup generators.

It’s the most awesome data center ever. The only thing missing is a pool of sharks underneath the conference room with slides to eject people from their seats into the water if they make you mad.