Google has been putting statues that go along with the new version of Android on its lawn since the OS first launched. It’s sort of a rite of passage that marks when the new version is official. A new statue has turned up on the lawn for Honeycomb – version 3 of their Android OS, first debuting on the Motorola Xoom tablet. 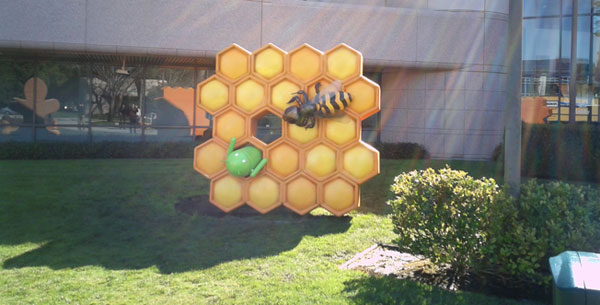 It has a honeycomb (surprise, surprise) and a gigantic bee that looks like it plans to kill the green Android popping out of one of the holes in the comb. The stature reminds me of a horror flick that I saw as a kid with giant bugs trying to kill people on some island somewhere.

The statue is in front of Building 44 on the Google Campus in California. I always think of sweet and yummy breakfast cereal when I hear Honeycomb. I wonder what they do with the old statues when the new ones come in.

[via Android Central via BGR]