Our interactions with gadgets continue to get more and more natural and instinctive. Yesterday at CeBit 2011 Tobii showed off a very promising technology. The Swedish company collaborated with Lenovo to create the world’s first eye-controlled laptop. The laptop has a sensor bar below its display that tracks the user’s eyes. Once calibrated, it lets the user perform a variety of additional functions using their eyes, such as switching between open application windows or firing up a quick access taskbar. 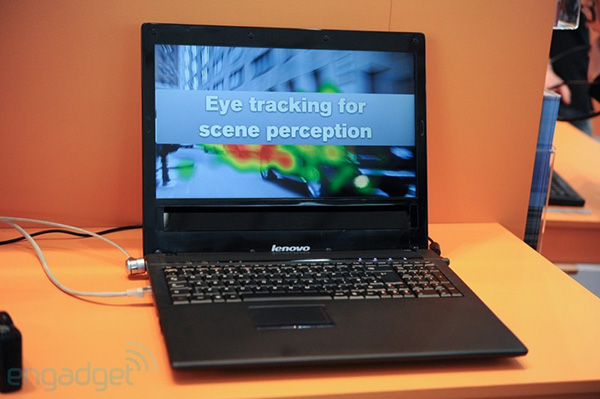 Other useful features of the technology include notifications that pop up right on the spot where you’re looking at. Engadget also mentioned an eye-controlled game demo, although sadly they didn’t capture it in the demo video below.

I like how Tobii is smart enough to realize that their technology isn’t meant to replace the keyboard or the mouse, rather it can serve as a complimentary way of controlling a device. Imagine playing a video game where the camera follows the movement of your eyes, or allows you to reload, access the menu or pause the game when you look off screen or at a corner. Or displays that only turn on when you’re looking at them. Or computers that can be controlled even when you’re a bit far away – the boss is coming! hide facebook! Just being able to switch windows or tabs using only your eyes makes it much faster to work on a computer. Man, the future is AWESOME.