I really love me some PS3. I use the thing for a Blu-ray player in my home theater, and we play tons of games on it. When my original PS3 died late last year, you would have thought the world ended around my house. We also have a Wii and an Xbox 360 and my son refused to play games on those consoles because “they aren’t cool” and we ended up getting a new PS3 in short order. 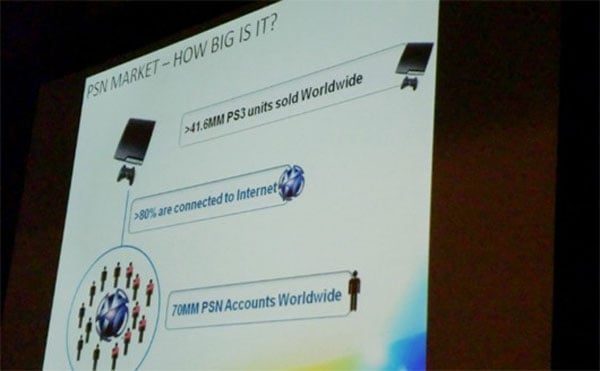 Apparently, I’m not the only one that really likes the PS3. Sony has unveiled some stats for the PS3 and notes that thus far it has sold 41.6 million PS3 consoles globally. Sony also notes that over 80% of those consoles are connected to the web, and have resulted in 70 million PlayStation Network accounts being created.

While tooting its PSN horn, Sony let the factoid fly that its revenue for PSN was up 70% in 2010. I guess things are looking up for Sony as Nintendo is hit hard with slumping sales of its Wii and DS systems. Traffic to the PSN increased by 60% in 2010 compared to 2009. This also means the PS3 is gaining ground on the Xbox 360, which reportedly had sold 50 million units worldwide as of January’s CES show – and that console had full year headstart in the market.