Where We’re Going, We Need Loads…

If Doc Brown even needed to travel to another time with extra clothes and flux capacitors in tow, this is the DeLorean he would use. The DeLorean was the stuff of car lust for me before I discovered Cannonball Run and the Lamborghini in my youth. In fact, there was a dude in my town that had a DeLorean back when they were new. I once saw him stuck standing on the side of the store waiting for the person that parked too close to him to move their car so the awesome gull wing doors would open. 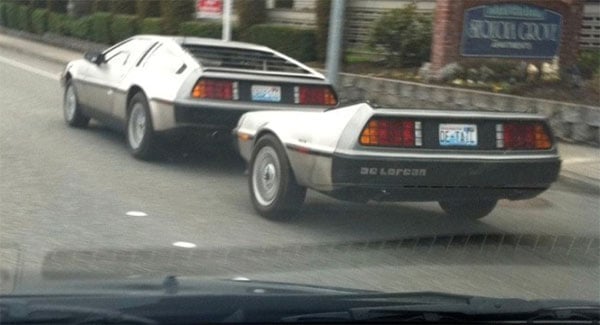 Somebody has discovered what may be the coolest use for spare De Lorean parts ever. The driver of this De Lorean built a trailer to go along with it. This is the only trailer that would make adding a tow hitch to a DeLorean acceptable in my book.

If only the De Lorean had the power under the hood to go with its awesome stainless steel body and looks. I love the license plate on the trailer too – De Tail.