All the Power Rangers Return in an Epic, Candy-Colored Battle

I’ll admit it, I used to love watching Mighty Morphin’ Power Rangers. My brain ate that formulaic plot up: start with a scene with all the Rangers at school, then a monster appears, they fight the foot soldiers unmorphed, then they morph and fight some more, then the monster of the day appears and they get owned, then the monster grows, then the Power Rangers summon their robots and beat the crap out of the monster. Not once did I dare to ask why Rita Repulsa didn’t just make a gigantic monster at the start of the episode and burn the school down. Then my friend shows me this video, and that feeling of watching something so phenomenally stupid but not caring came rushing back: 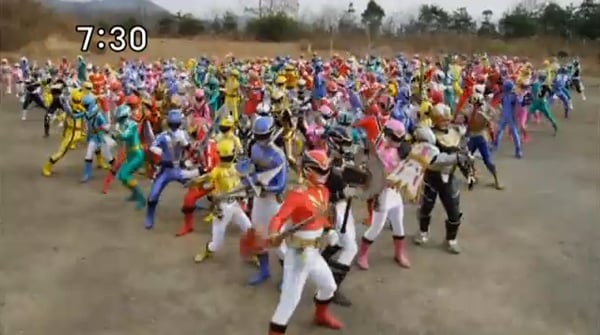 That’s right folks, all 5 billion and 5 Power Rangers in one place. Actually I don’t know that for sure, but there’s a ton of them. All at once. Wearing black and white and every shade of red, blue and green. This is from the latest Super Sentai (the original Japanese term for the franchise) series which premiered last February 13.  Are you ready for this? No, you’re not, but here we go!

What… just… happened? This is too much. They turned into space fireflies… And that was just the first episode of the series. I look forward to the inevitable Power Ranger giant robot battle.