The second a new gadget comes out, you can always rely on the iFixit guys to rip it apart the same day. They’re actually still putting the finishing touches on their iPad 2 teardown, but it’s complete enough now to share some of the pics and details found inside. 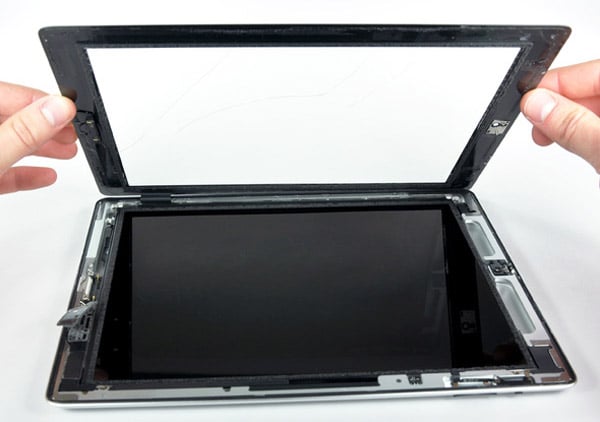 The first thing they discovered when they tried to crack open the new iPad is that the entire front is held on by glue, glue and more glue – no clips, no screws. It took some heat and a plastic pry tool to pop it open, and chances are that you won’t ever want to do this yourself unless you want to kill your iPad. Leave it to the pros.

Popping off the LCD screen just required the removal of several screws. Once open, they found a set of three battery packs, just like the original iPad, but with a 25 watt-hour rating vs. the 24.8 watt-hours of the iPad 1. That means that if you can truly get similar battery life to the original, it’s all thanks to highly-efficient hardware. With a CPU that’s significantly more powerful, I’ll be impressed if real-world battery life holds up to the iPad.

A few ribbon cables later, and a few more screws, and they revealed the brains of the operation – the logic board. I’ve included a jumbo version of the logic board below, in case you want to do any chip sleuthing of your own, but iFixit has identified the core chips as follows:

There’s also mystery Texas Instruments chip that they haven’t been able to get to yet. iFixit confirmed via software that the iPad 2 does, indeed have 512MB of RAM.

There’s a separate WiFi daughter board, powered by the BCM43291HKUBC, which is the same WiFi/Bluetooth/FM Tuner chip found in the original iPad and iPhone 4. They also found tiny board with an STM Electronics AGD8 2103 gyroscope and LIS3331DLH accelerometer for tracking motion and direction of movement. Both cameras sit on their own individual ribbon cables, and were relatively easy to remove for inspection. 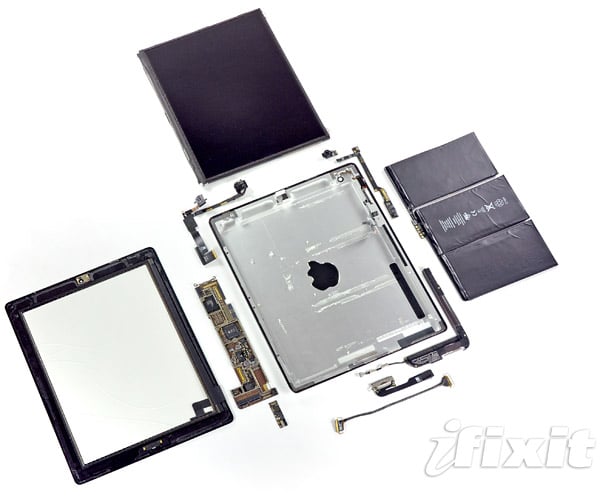 Overall, iFixit rated the iPad 2 a “4 out of 10” for repairability, which basically means you shouldn’t try and ever fix one yourself. On the plus side, besides the gluey mess that holds the front bezel on, most of the device is held together with Phillips screws. Too bad the display is stuck to the front panel with foam tape too, which makes it sound like you could easily crack the screen if opening it yourself – especially since the iPad 2’s glass is significantly thinner than the original.

Unsurprisingly, there really isn’t that much new under the hood of the iPad 2. Other than the two cameras, the gyroscope and the A5 processor, the other core parts (display, controller, accelerometer, batteries) are virtually the same as the original. I guess that speaks volumes about how damned good the original really was. It’s certainly why I didn’t upgrade mine today. Until there’s an app that I want that absolutely demands the CPU/GPU processing power of the iPad 2, I see no meaningful reason to upgrade.

You can check out the full teardown, with lots more pics – over at iFixit.