Could the iPad 2 Kill Console Gaming?

Now before all of you PS3, Xbox 360 and Wii fans start hating on me for that title, let me say I’m not taking sides in this argument. I own all three consoles and an original iPad, so I’m as unbiased as anyone. That said, when hooking up a brand new iPad 2 to a big screen with an HDMI cable, there’s definitely compelling evidence that the tablet could someday put a dent in the console gaming industry. And if not the iPad 2, future generations for sure. 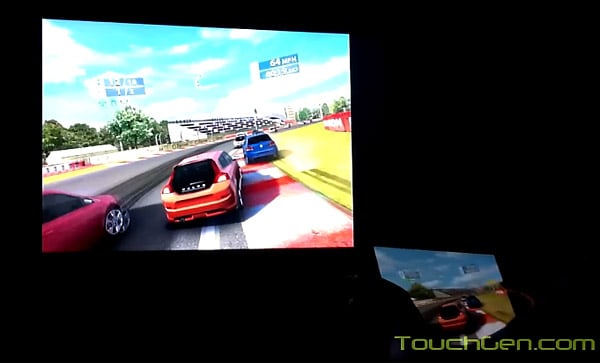 Just check out the video in this clip, showing off the iPad 2 playing Real Racing 2 on a 50″ HDTV.

Impressive, no? While it’s a little hard to tell from the video how good the image resolution is, I was definitely taken aback by how good it looks. It’s certainly more impressive than anything the Nintendo Wii can do, and nearly as good as some PS3 and 360 games I’ve played. Here’s another example – Infinity Blade -the Unreal Engine powered game which is already pretty amazing in its own right – running on the big screen.

After watching those videos, you do have to ask yourself where the line is drawn between handheld gaming and console gaming, no? With the iPad 2’s impressively fast CPU/GPU, wireless connectivity, HDMI output and motion sensing technologies, you really do have a reasonably powerful gaming system.

Sure, the graphics don’t look quite as good as the Xbox 360 or PS3, there’s no surround sound processing, and that the touchscreen controller and lack of Blu-ray player are definite downsides, but I’ll leave that to you guys to debate. Also, the iPad 2 is more expensive than any of the consoles out there, but it’s portable and you can use it for much more than playing games and watching movies. Never mind the fact that even the priciest games cost about 1/6th of what a console game will set you back. And Apple releases new, improved hardware about once a year – the lifecycle for consoles is anywhere from 5 to 10 years. Think about this for a second. That Xbox 360 you’re still playing every night has 6 year-old CPU and GPU technology in it. Sure, they’ve reduced chip size and cost, but the core technology is still the same.

Between the iPhone and iPad, Apple certainly gave Sony and Nintendo’s handheld products a run for their money. So what do you think about the possibility that the iPad 2, and future, more powerful versions of Apple’s tablet (or Android tablets for that matter) will put a dent into yet one more device market?