I am starting to think that there is no end to what a geek with some ingenuity and a Kinect can’t hack. Some geeks at MakerFaire over in the UK got bored and ran across a dude that had built some Tesla coils. They talked the Tesla builder into allowing them to hook up the Kinect to his coils. 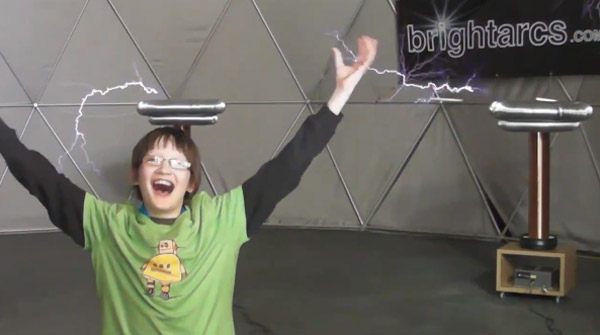 The hack was a true team effort, with Brightarcs providing the tesla coils, and Tom Wyatt and the London Hackspace team putting together the Kinect part. The finished product watches for the person’s motion and allows the control of the Tesla coils to be done based on the movement of their hands. Move one hand and only the coil on that side discharges, move both and they both discharge. Check out the video to see how cool this really is:

I had no idea Tesla coils were that loud. This is so awesome, I would have pretended to be the evil Emperor shooting lightning from his hands screaming “Then Die, Skywalker!” right before Darth Vader tossed him off the bridge.