NASA is tired of all that space junk that’s orbiting our planet. The myriad of broken satellites and other junk orbiting poses a hazard to functioning satellites that are in orbit. A tiny little chunk of anything traveling at orbital speeds is enough to destroy a satellite and possibly harm any spacecraft or astronauts that are in the way. 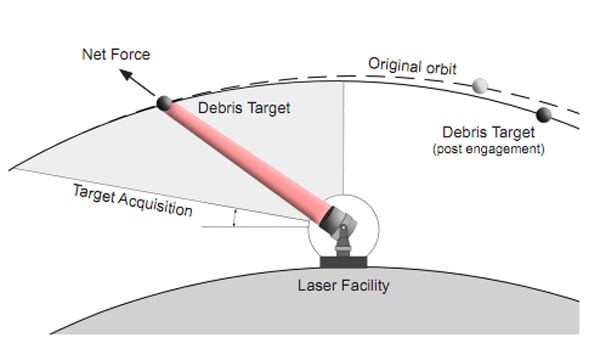 NASA scientists are now conducting a study that Dr. Evil would approve of. They’re looking at the possibility of using a ground-based laser to clean up the debris. The space agency says that about 60% of the junk orbiting the Earth right now that threatens satellites like the ESA Earth observing satellite can be traced back to the Chinese military test of an anti-satellite weapon and the collision between the Iridium 33 and Cosmos 2251 satellites.

They would use a medium-powered (5kW) laser on Earth to track and then fire at the orbiting debris. The laser wouldn’t burn the debris up itself or attempt to directly destroy it. However, the scientists reckon the laser will slow the down the debris’ orbit enough so that it will fall back into the atmosphere and burn up before hitting the ground. The system may even be able to maneuver satellites from the ground with the satellite needing no propulsion of its own.