YouTube user ProtoDojo wanted a more precise way of controlling his favorite iPad game Reckless Racing. Fortunately for him, he has the modding chops to actually do something about it. So he came up with RoboTouch, which now allows him to play games on the iPad using a NES controller. The controller is hooked up to several micro control servos with conductive arms that attach to the iPad via suction cups. Each arm corresponds to a button on the NES controller. 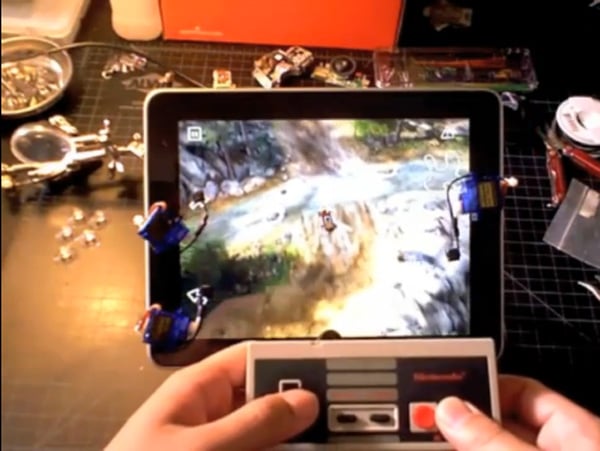 The hack isn’t without it’s drawbacks though. First of all, as you’ll see in the demo video below, it takes quite a while to set up. Plus the servos make annoying squeaks when they move.

ProtoDojo says he’ll put up more details and pictures of RoboTouch on his website (currently down) although it seems to be down as of the moment. If Apple released a complementary gamepad for the iPad I’m pretty sure it’ll sell, but then that would be tantamount to exposing the limitations of their touch-based UI.