Toshiba Mobile LCD Monitor Adds A Screen Wherever You Go

I have never liked working on a notebook computer if I can help it. I know a lot of people that work from notebooks exclusively in the office and out. I want room to spread out and a nice thin keyboard and a high sensitivity mouse when I work. I don’t want a cramped notebook keyboard and a trackpad. I especially don’t want a small screen. 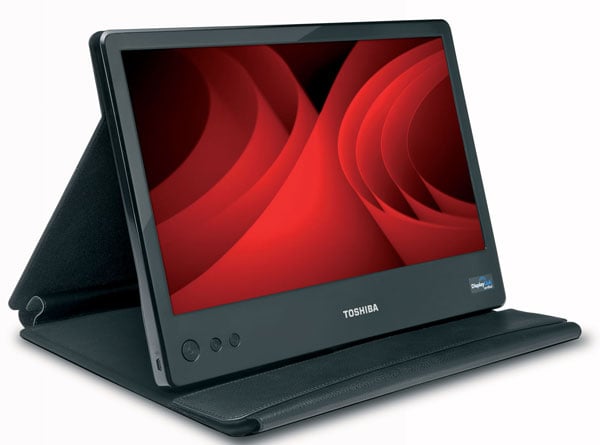 I have worked with a big 30-inch LCD for years and once you do that there is no going back to small screens. This is why it drives me crazy to travel and have to work from a notebook. I can take a mouse and keyboard with me, but there aren’t many solutions for the lack of screen real-estate. Toshiba has a new solution though that will make using that notebook easier for folks like me called the Toshiba Mobile Monitor.

The little screen is a 14-inch, 1366×768 monitor inside a handy folding case. Toshiba says that the panel is right out of one of its notebooks. The cool part is that the screen gets both power and connectivity from a single USB port, and you can use it as either a mirrored display or to gain extra screen space. The downside is that your notebook probably won’t last as long when you connect this thing to its battery. The Toshiba Mobile Monitor sells for $199.99 (USD).