Scrolling is one of the most frequent actions made in interacting with touchscreen devices. For me it’s such a basic action that I actually didn’t think too much of it, until I saw this new control interface developed by a research team at Osaka University. Called the Flex, it’s a touchscreen interface that basically distorts the contents of the screen when you put your finger down and scroll, as opposed to scrolling immediately. When you let go of the screen, then the content will warp back into its original shape, scrolling in the process. 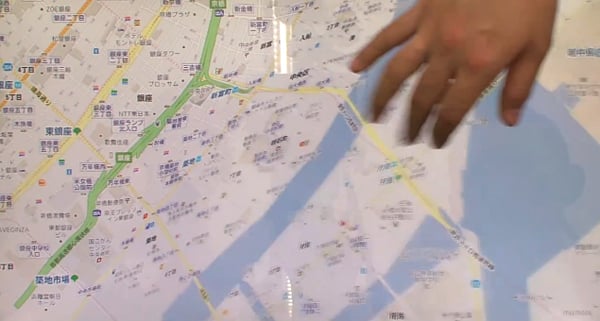 What are the advantages of having an interface that distorts the content before scrolling it? First, it lets you preview what you’re going to see when you scroll before you actually scroll. With today’s interface, the moment you move your finger to scroll the content immediately moves. With Flex, you can for example distort Google Maps in several directions and quickly preview the surrounding area while still seeing where you originally were on the map.

Flex also makes it easier to go back to where you originally were on the screen, although with small touchscreens like on smartphones that second advantage might not be too noticeable. The researchers also claim that Flex could be easily integrated into any touchscreen-based device, so don’t be surprised if you find yourself being able to distort the screen of your next phone or tablet.