The techniques used in medicine today have improved greatly over the last few years. Surgeries on the heart and other parts of the body that require you to be cut open and result in a long recovery have gone away to be replaced with tiny incisions and tiny robotic surgical instruments. A surgeon has taken his da Vinci surgical robot and used it for a cool non-surgical need. 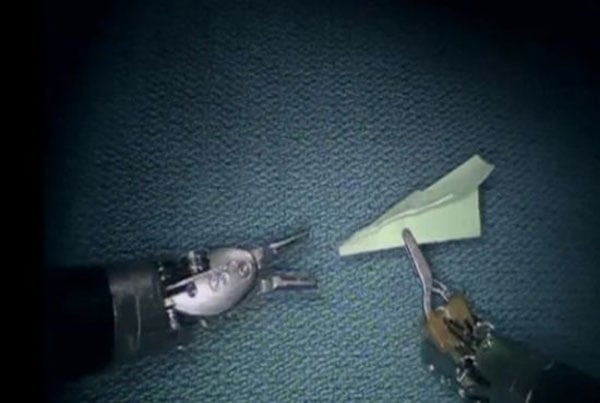 Doctor James Porter of Seattle’s Swedish Medical Center apparently wanted to show folks how much dexterity his fancy robot has, so he used the thing to fold a paper airplane that is really small. I never realized the dexterity that these robotic tools had so the good doctor has made his point. Check out the video to see all the tiny folding action.

The little tongs get to folding like it’s no big deal. The thing that really impresses me is that the doc on the other end has enough control to get the grippers to make such precise little movements.