Subwoofer Kills Phone Book, What About Your Ears?

This guy has put God-knows-how-much money into the stereo in his Tahoe. It has three alternators under the hood just to give the stereo enough power to operate while the car is running. It also has a bunch of batteries all around the truck as well. I bet it has about a bajillion watts of power. 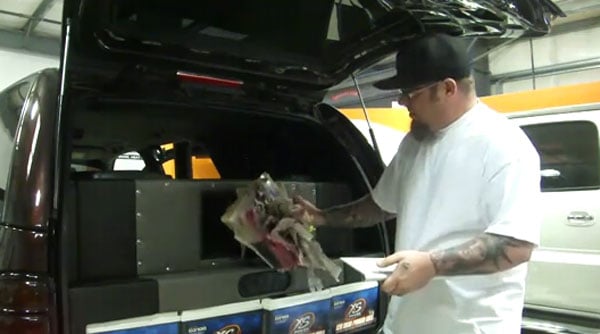 I have been in cars before with powerful subs that were loud enough to hurt my ears and make the windows bulge in the car, but this stereo system takes it to a new level. To show how much air the four subs in their enclosure displace, the guy took a phone book and crammed it into the giant port the air comes out of. Watch the video to see what happens – jump to about 2:45 for the good part.

Suffice it to say that guys won’t want to get their family jewels anywhere close to that port or they will face an air-powered rack-o-rama.