The image below might look to you like some cigarettes lounging around in couple of ashtrays, but there’s more to this scene than meets the eye. Take another look, and you’ll see a cable leading from the table to a laptop, and you’ll realize that it’s actually a controller for a synthesizer. 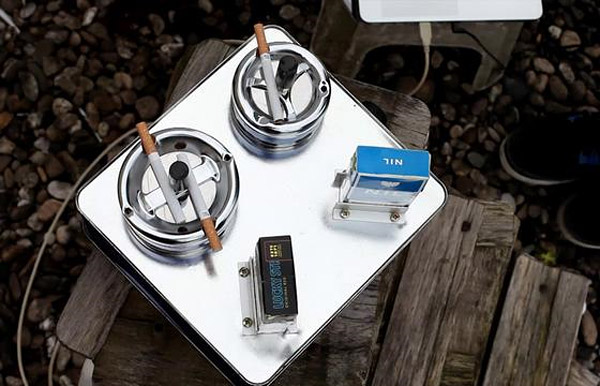 The Ziggybox is one of the more unusual synthesizer rigs I’ve ever seen. It was created by Christian Losert and Paul Schengber, and it “generates and modulates sounds by placing cigarettes in the notch of an ashtray or by opening a box of cigarettes.” It sounds like a ridiculous idea, but watch the video below, and you’ll see how cool it actually is:

The whole setup uses a few strategically-placed light sensors, interfaced with a C++ and Open Frameworks software to control Ableton Live over MIDI. I suppose there’s no reason they had to use ashtrays and cigarettes to control their sequencer, but I still think it’s a cool idea – or is that a KOOL idea?