We had a ship-in-a-bottle when I was a kid and it was really cool. I always wondered how exactly they got the thing inside the bottle. I always suspected they cut the bottom off the bottle, then stuck the ship in and glued the bottom back on. A geeky gal has taken some LEGO blocks and an empty bottle and made her own pirate ship inside the bottle. 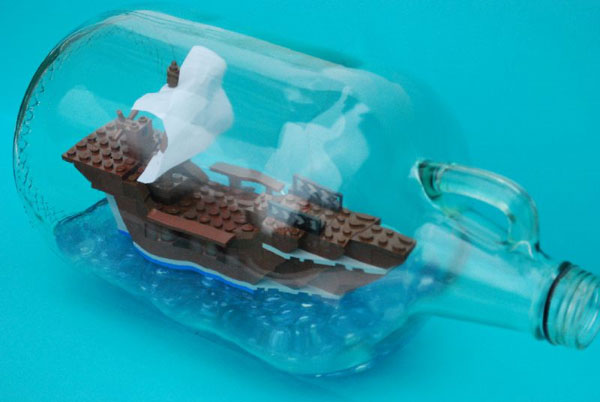 The time-lapse video is really cool and the builder, Julie Morley, had to create her own tools for the construction. The tools appear to be wooden sticks with small LEGO bricks glued to the end. She sticks one of the tools into the opening to hold the ship down and then sticks the other in with the next brick attached and so on. Check out the video below to watch the ship being built, and then make your own if you are so inclined.

Julie notes that the project took about a week to plan and about three days to build. She also admits to uttering “more than a few” expletives during the process.