Who could forget about the transforming briefcase suit from Iron Man 2? We’ve already seen a replica of the briefcase, but Ryan Brooks takes it to the next level, building one that actually transforms into a wearable suit. Although in this case, we’ll have to make a considerable compromise of what qualifies as a briefcase: 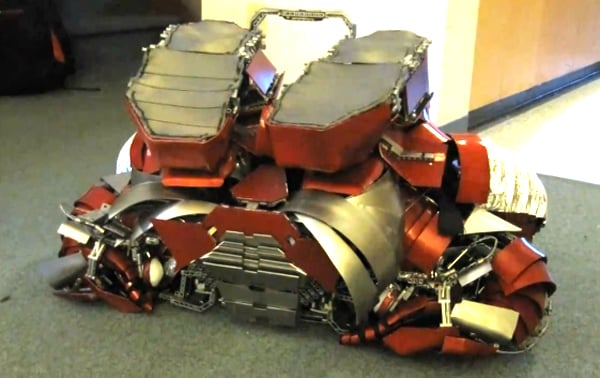 Not exactly sneaky isn’t it? I guess you can pass it off as a pile of scrap. With a handle. But let’s not dwell on such trivial matters. Here’s the suit and Brooks – who even looks a little bit like RDJ’s Tony Stark – in action. Prepare for lots of awkward silences:

Brooks got the Best in Show award at the Toronto Comic Con 2011. Here’s footage of him putting it on at the convention:

I can’t believe no one noticed how considerate Whiplash was. When I saw him start reading a magazine while waiting, I just lost it. Check out Cosplay for the equally impressive list of materials that Brooks used for the costume – everything from Lego pieces, fishing lines, magnets, clay, a tomato-saver – and the arc reactor.