I suspect if we had our trusty Hubble telescope aimed in the direction of Alderaan when the Death Star set its example, the pics might have looked like this. NASA has discovered what it called an “Unprecedented” explosion in the constellation Draco. They aren’t sure what the explosion is at this time, but it could simply be Eric Bana looking for Spock. 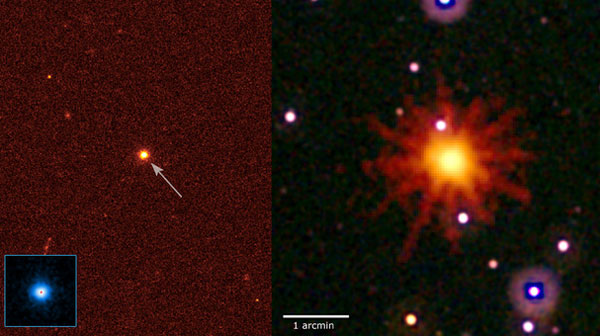 NASA said that it has never seen anything this bright that lasted this long in the past. As it is right now, all available telescopes are looking in the direction of Draco and astronomers are trying to figure out what is going on. They have a theory though, and it’s epic.

Some think that a star in the distant galaxy strayed to close to the black hole at its center and was sucked in by the tidal forces and the star was torn apart. The speculation is that the black hole happens to be aimed at us and we are seeing all the star debris and radiation out flowing from the rotational axis of the black hole. The giant explosion is about 3.8 billion light years from Earth.