Fire extinguishers are relatively cheap nowadays, but they require periodic maintenance and are not exactly idiot-proof. If you’re looking for a dead simple way of putting out small fires, check out the SAT119 fire extinguisher. Using it couldn’t be easier – you drink it and it turns you into Iceman. No. Don’t do that. You simply throw it – bottle and all – into the fire. 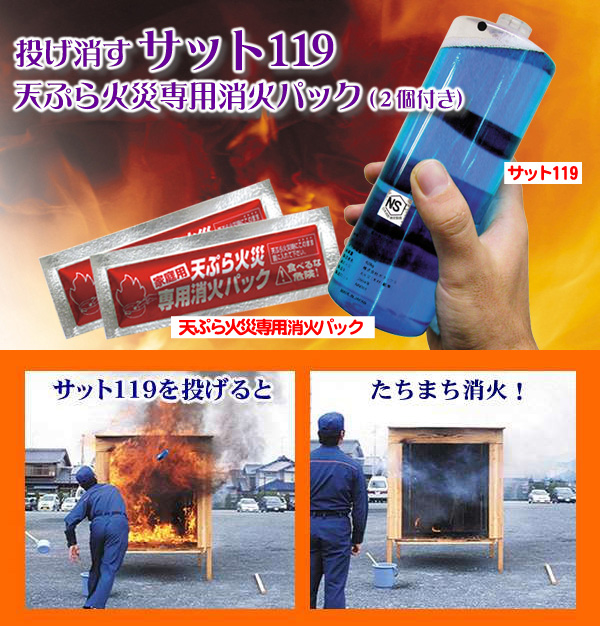 As much as I’d like to believe that SAT119 is just filled with the bravest and most determined water molecules on Earth, according to the manufacturer’s website, SAT119 contains chemicals that stop fires by accomplishing several things at once. One of the chemicals reacts with the oxygen in the vicinity to produce carbon dioxide, thus depriving the fire of oxygen. It also cools down burning materials and produces ammonia gas, which creates “a fire retardation effect that restrains the burning chain reaction.” Yes. Of course. That barely made sense to me. Here’s a video of a few safety experts choosing SAT119 and finding it super effective:

In its concentrated form, SAT119 is good for putting out small fires; for larger blazes the manufacturer suggests diluting it in water. By the way the red packets in the picture above don’t contain the SAT119 fluid. Instead they contain potassium carbonate, which apparently is great at snuffing out cooking oil fires. Rakuten was selling the SAT119 for ¥6,090 (approx. $70 (USD), but they’re out of stock. If you know someone who lives in Japan you can ask them to snag a bottle or two from Amazon Japan.