LockIfNotHot Locks PC If Temperature Drops, Not If User is Ugly

We’ve featured a Bluetooth-based program that automatically locks Windows PCs when the user walks away. Here’s another approach to automatically locking a computer. While the Bluetooth-based program relied on proximity, Didier Stevens’ program LockIfNotHot works in conjunction with an IR thermometer to detect changes in the surrounding temperature. 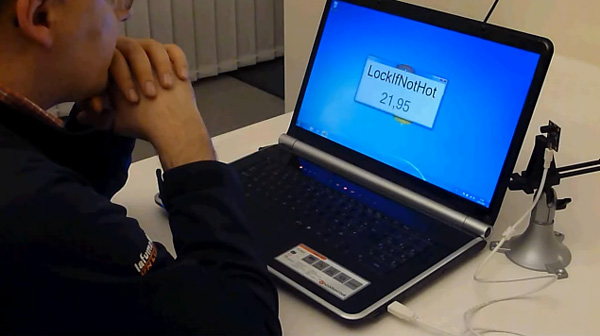 The sensor’s responsiveness is impressive. The advantage that the Bluetooth-based unlock program has over LockIfNotHot is that it can both lock and unlock a computer automatically. But Stevens probably realized that making his program work both ways – i.e. unlock the computer if it gets warmer – would be quite dangerous, since any object that causes an increase in temperature will trigger that function, so he just left it as it is. Once the PC is locked you’ll have to log in the normal way and enter the password.

You can download LockIfNotHot for free from Stevens’ blog, but of course it’s useless without the IR temperature sensor, and that’ll set you back almost $90 (USD).