The Meissner Effect Illustrated (By a Cute Little Guy)

The Meissner effect is defined as “the expulsion of a magnetic field from a superconductor during its transition to the superconducting state.” When put to the test in scientific experiments, it usually manifests itself as magnet hovering above a liquid nitrogen-cooled superconductor. But that’s kind of boring, so some guys at Poland’s Lublin University of Technology decided to make it a little more fun. 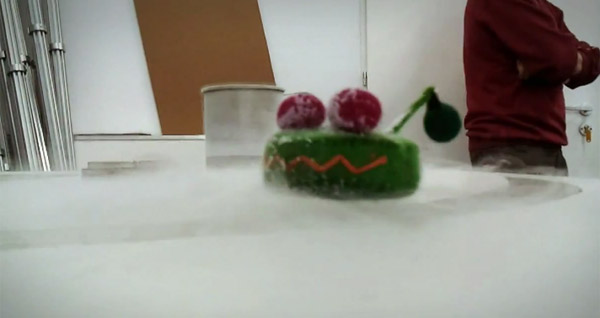 In this brief laboratory demo, they put their lab mascot – a little guy known as “Zenek” on a superconductor track, and let the Meissner effect carry him along on a bed of magnetic energy, through wisps of liquid nitrogen fog. By carefully balancing Zenek, he whirrs around the track multiple times with only a small push. The short video was shot by Jakub Przybylski, and set to the tune of Regina Spektor’s Us, which makes it all that much more whimsical.

Last time I remember seeing such an adorable laboratory mascot set to music was Keepon and his little dance to Spoon.