We’ve featured a lot of cool and useful Arduino–based creations here at Technabob. If you’ve ever wanted to try your hand at making an Arduino-based project but know little about programming, then you’ll want to support Julián da Silva and his Minibloq project. Minibloq is a graphical programming environment for Arduino that enables users to make programs by dragging blocks instead of or aside from typing code. 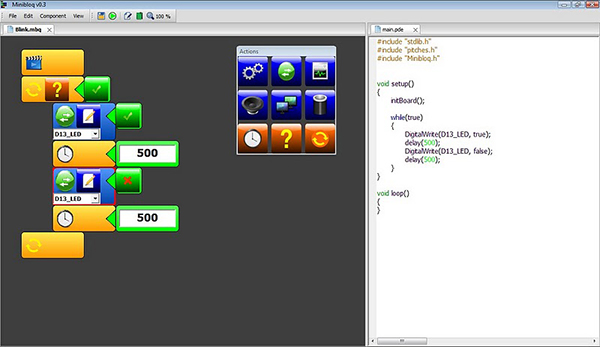 da Silva promises that Minibloq will be easy to use but still sophisticated, fast, portable, modular and free. Here’s Minibloq being used to work on a DuinoBot.kids on an Intel ClassMate convertible:

I think the best thing about Minibloq is that it can show the equivalent code of the blocks used in real time, which is a pretty effective way of weaning beginners from the interface. *UPDATE: da Silva has already set up a Kickstarter fund for the project, so check it out and donate if you want to help him complete it. As with all Kickstarter projects, those who give significant donations will be entitled to certain privileges, such as access to pre-alpha versions of Minibloq and even the full source code. You can also check out the Minibloq blog for more info.