Every time I think I’ve seen LEGOs pushed to the limit of their capabilities, somebody comes along and proves that there’s just that much more you can do with these incredible building blocks. In this particular case, we have a complex assembly line of robots built from only LEGO Mindstorms and standard LEGO pieces. 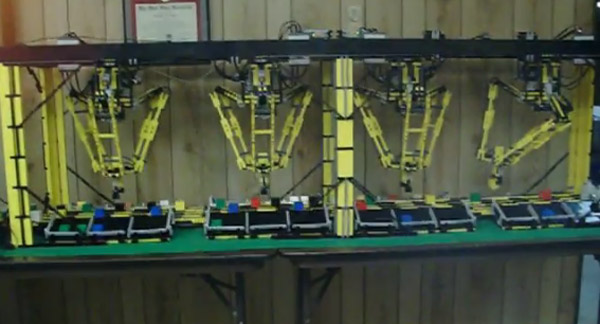 Chris Shepherd invested countless hours, and tens of thousands of pieces to build this LEGO Quad Delta Robot System, which is an incredibly complex and capable assembly line. It works like this: a pair of conveyor belts flow items below a army of mechanical LEGO ‘bots. A light/color sensor is then used to instruct the robotic arms to grab the item and sort it into the appropriate bin based on its color. Check it out in action here:

Pretty amazing, no? Each of the four robotic modules can grab up to a dozen items per minute, producing a total sorting capacity of 48 items per minute. The system is inspired by industrial delta  robots, which are used for picking, packing and sorting small objects on automated assembly lines. But those aren’t usually made from LEGOs.

You can check out more details on the build, and all of the science that went into this mechanical marvel over at Chris’ blog, Tinkernology.