You remember Joerg Sprave, that dude that invented the machete flinging slingshot? Well he is back with another awesome DIY weapon. I am more surprised that he appears to be back with all his fingers intact. The newest weapon is sort of like a cross between a rubber band gun and a slingshot. It apparently flings rocks, ball bearings or other things at your enemy. 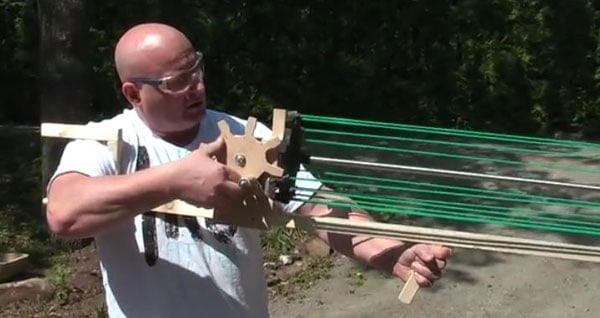 I can only imagine how much sting this thing will inflict. You will need to aim for the eyes of the approaching zombie hoards, or use it to back the person next to you so the zombies can get them while you run. He shoots ball bearings in the video below, which would certainly hurt you – if not kill you.

Sure, it’s a big and unwieldy weapon, but it is certainly very cool, especially given how fast it can fire. The official name of this thing is the Gatling Slingshot Crossbow, but I don’t see the crossbow part.