While it seems like a simple task, teaching a robot to catch a ball that’s thrown into the air is much harder than it sounds. But it’s no problem for the DLR’s robot, Rollin’ Justin, who’s been trained to catch balls in his grippy robo-hands. 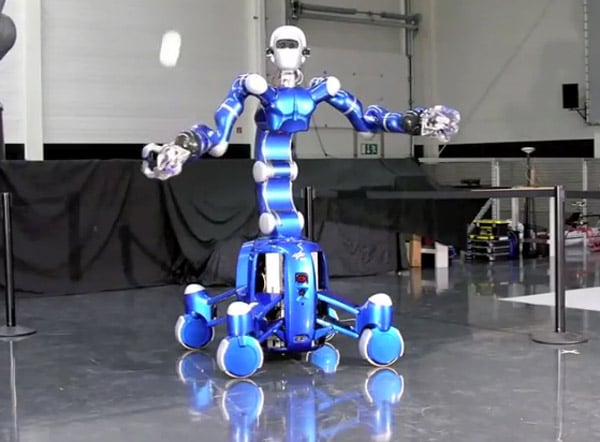 Using stereoscopic cameras and advanced computer-vision software, Justin can track a flying ball through the air then position his hands to within 2 centimeters of the ball’s landing zone in as little as 5 milliseconds thanks to his speedy and stable arm and gripper mechanisms. His wheeled base doesn’t hurt his 80%+ catch rate either. This means Justin is probably as accurate as you or I when it comes to nabbing balls thrown in the air. See Justin in action in the video below. After he’s done playing catch, you’ll get to see him fix a perfect cup of coffee.

I wonder how fast Justin could catch a scorching hot cup of coffee thrown at him?