Master modder Ben Heck has been wowing us for almost five years now with his portable console mods, many of which are laptop versions of the Xbox 360. While his designs are great both in terms of form and function, most of them are either one-offs or quite expensive. Fortunately, a modder named [Ed] has stepped up and is selling made-to-order Xbox 360 Slim laptops. 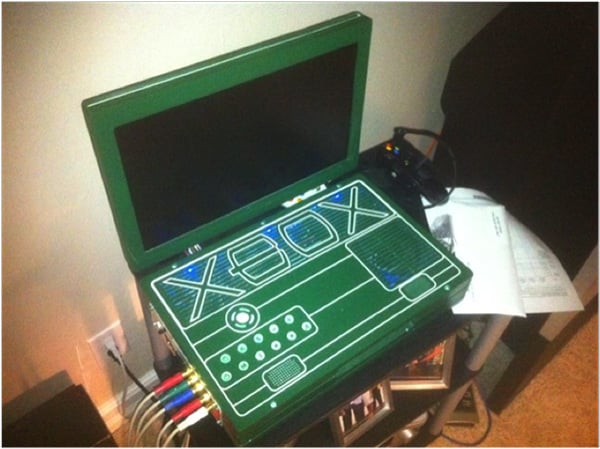 Pictured above is the very first Xbox 360 Slim laptop that [Ed] made. Not bad right? It has a 17″ LCD screen that does 720p HD, component out, 4 USB ports, Ethernet, and a headphone jack. The power brick is also inside the laptop itself, so you only need to bring the power cable. The buttons and controls are all backlit as well. Here’s [Ed] demoing his creation (you’ll need to crank the volume):

[Ed] has priced his console morphing skills at $1600 (USD). Definitely not cheap, but you can get significant savings if you cut corners on your order – for example you get $200 off if you send [Ed] your own Xbox 360 Slim to be turned into a laptop, and a $100 off if you choose to leave it unpainted. On the other hand, if you’ve got the dough, [Ed] is willing to engrave any logo, picture or vector into your laptop. Other parts of the laptop can be customized as well, including the color of the LEDs, buttons and the paint. Check out [Ed]’s website for more info.