We can only upgrade the software on our smartphones, but what if we could also do the same for its hardware components, just like with its big brother, the PC? That’s the idea behind the Revive Smartphone. Designed by Kinneir Dufort, the Revive is meant to be modular – you can upgrade parts like the processor, internal memory and battery. But that’s not the whole story. 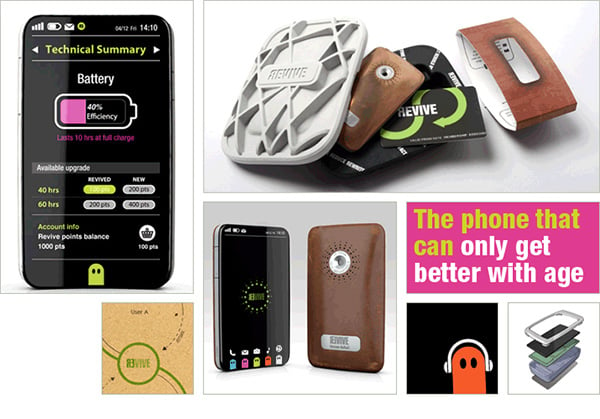 Companies like Apple redesign their phones annually or biannually, introducing hardware upgrades per iteration and upgrading the aesthetics, making the previous generation look like crap in the consumers’ eyes, even though the phone itself still works fine. The idea behind Revive is the exact opposite of that – KD wants to create a sustainable electronic product, and they want people to hold on to the Revive smartphone for as long as possible. How? By awarding points to users based on how long they keep the current hardware. These points can then be used to upgrade the phone:

Clever eh? If you noticed, the Revive’s back is protected by leather, a material that gets better with age. This is a deliberate move on KD’s part – if you can’t replace the part, you might as well make it durable and have a more or less long lasting appeal. The smartphone’s UI is intended to endear the phone to the user as well:

This is really an admirable concept, one that shouldn’t take consumers a lot of convincing if done right. It’s environment-friendly, its upgradeable nature appeals to hardcore users and the gamification of upgrading – i.e. the points system – is a brilliant move to convince users to hold on to their phones instead of springing for other, newer models.

That said, I think the software and UI should be upgradeable and customizable as well. I know the intent behind the UI, but I don’t think it will appeal to everyone. What will appeal to everyone? Nothing, which is why the customizability should extend to the software component of Revive as well. Overall, it’s a wonderful concept, and I really hope it gets turned into reality.