Peter Dering was looking for a secure and convenient way to carry his SLR camera. A neck strap is convenient and lets him take a shot quickly, but it also increases the risk of damaging the camera while it’s dangling and swinging. A camera bag offers great protection, but taking the camera out of the bag takes some time. So Dering came up with the solution himself. 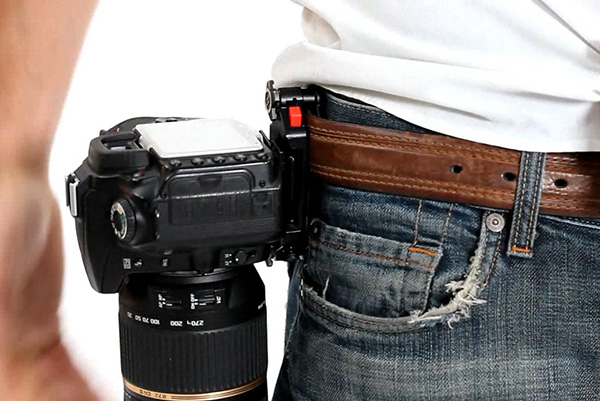 Dering calls it the Camera Capture Clip System. Simply put, Dering’s invention is made of a base and a universal attachment that locks onto a camera’s tripod mount. All you have to do is secure the base on your belt or bag strap, place the attachment on your camera and slide the camera into the base. To release the camera, all you have to do is press the red release button. As a safety feature, Dering also incorporated a redundant twist lock, which when engaged prevents the camera from being released even when the release button is pressed.

The Camera Capture Clip has obtained stellar support over at Kickstarter; as of this writing its backers have already pledged more than $110,000 (USD), a far cry from Dering’s original goal of $10,000. So I guess it’s safe to say that the production of the Camera Capture Clip is a certainty. Pledge $50 or more at Kickstarter if you want to be one of the first people to own one.